Ray Pohjanheimo, an EIT Digital Master School graduate, is working on the very first Cognitive Behavioural Therapy in the world based on Virtual Reality (VR). “As far as I can see no one has done this before”.  Backed with some funding he and three other EIT Digital Master School graduates foresee filling the space of VR into psychology with the founded startup Ameliate that recently partnered with Helsinki XR Centre and the Finnish VR Association (FIVR).

The idea behind the startup slumbered in Ray Pohjanheimo’s head during his master’s in psychology at Lunds Universitet in Sweden. He thought about a new concept for Cognitive Behavioural Therapy (CBT). CBT is an effective therapy for the treatment of anxiety and depressive disorders, like generalised anxiety disorder and unipolar depression, writes Pohjanheimo in one of his blogs. CBT, focusing on changing an individual’s cognition and behaviour, has shown to be more effective in treating adult depression than antidepressants.

His concept would involve technology. “I did not know how to develop that and I didn’t know anyone who could develop it for me.” In 2018, when he was working on consumer psychology in a marketing job, he discovered the two-year double degree EIT Digital Master School programme Human Computer Interaction and Design. “I felt this could be an opportunity for me to learn how to make the idea a reality.”

As a psychologist, technical education sometimes was challenging, says Pohjanheimo looking back. “I had to work harder on the programming classes”.  However, in the first year, his background seemed useful. “We were learning to design for behavioural change. I could see some of the theories that I had learned in psychology being used in the course as kind of a theoretical framework for the designed applications.”

In one of the courses at the entry University of Twente, the students had to work on a user research project using multiple methods. “This was the push I needed to make the first working prototype of ‘my’ product.”

In the second year of his masters, which he followed at Université Paris-Saclay, the psychologist kept refining his idea of offering virtual CBT. He retrieved help from Zack Wilson, who also studied Human Computer Interaction and Design at the same entry- and exit university as Pohjanheimo. “Zack is better in programming; he can figure how to program things faster than I can.”
His initial idea of a self-help application for people with psychological issues however, did not look so unique anymore. “I noticed that an application where the user would be connected to a therapist could be a better field to pursue. So, I started developing together with Zack a therapist dashboard for the application.”

During his internship at the Dutch mental healthcare company Psylaris, he found a new distinctive edge for his startup. Psylaris develops psychological applications for Virtual Reality. As an intern he designed a mental healthcare application in virtual reality, applying his expertise in psychology and Human Computer Interaction Design. “This made me realise that there is a lot of empty space in VR for psychological applications. I figured: transporting CBT to VR could be something completely new.”

Another thing he observed at Psylaris was the business model of selling directly to therapists. I was able to see the validation of this model that I had in mind. I learned that you could make money out of that.”

Pohjanheimo discovered the contours of a market for his startup.

The market for users is there, he concludes in his blog: ‘about 83 million EU citizens are suffering from a mental health issue’. According to Deutsche Welle, one in 25 people have been diagnosed with depression, one in twenty with anxiety.  And an investigation of the Spanish Newsroom Civio, found that national public health care systems often don’t provide adequate treatment to these people. “Some countries lack the resources to provide mental health care,” continues Pohjanheimo. The waiting times are too long with as a result that 56 per cent of the patients in Europe with depression receive no treatment at all, reported the European Commission already a few years back.

Pohjanheimo sees two problems to address: providing more people with accurate treatment and helping to reduce the waiting lists at therapists. “We can target both of these problems”. In a case study of his online CBT tool, he found positive results in the form of diary entries and mood improvement.

Officially he and Wilson started the company Ameliate in November 2020. That was when the process of registering was over. “You need to figure out and register quite a lot: how many shares do I want to have in the company,  do I want to join the employer registry immediately or afterwards, you need VAT registry, and… Long story short: figuring out what is the best way to  found the company was I think  probably the most time-consuming thing.”

The name Ameliate derives from ameliorate – “an interesting way to say to make something better” –  and it also resembles alleviate, a synonym for ameliorate. “A relevant part of the naming process was also that ameliate.com was available.”

The core of Ameliates’ products is Cognitive Behavioural Therapy. ReflectCBT, based on his first prototype, is a mobile-friendly self-help online therapy solution based on cognitive-behavioural therapy to use with or without therapists. It is free to use for individuals. ReflectCBT can be connected to a therapist as a premium service, meaning that the therapist pays for the premium. He or she can then make use of the Ameliate product Therapist Dashboard to see data from connected clients’ progress and common patterns in responses in an accessible way.

Pohjanheimo illustrates the tool with an example. “The tool helps users seeing a broader picture of a bothering situation. For example, if a person experiences a cashier who is being rude and (s)he keeps thinking about this unpleasant event then CBT can help to not take the situation too personally. Through this process, people gain a little more perspective. ReflectCBT is the first step of describing and thinking about the situation, evaluating how it distresses them and monitoring their mood.”

The VR CBT, the next step, is the psychology ground-breaking product that is in development. “What we’re building now is that the user can challenge the cognitive bias. The added value of the VR component is that we can illustrate the cognitive biases. The VR brings people into the bias that bothered them and can help to zoom in and out so the patients can see the broader picture of it. There is an interactive illustration of the cognitive biases to help the patients to better understand their biases and to help them realise how these apply to their situation. It is another way of applying CBT.”

Virtual reality therapy has more impact on the brain. “For my thesis, I read a lot of studies where they have some very impressive results using different types of psychological VR apps and because you’re fully immersed in the VR world the impact is stronger compared to 2D experiences.” Therefore, Pohjanheimo believes, the VR CBT will open the world of VR for psychology and cognitive behaviour therapy. 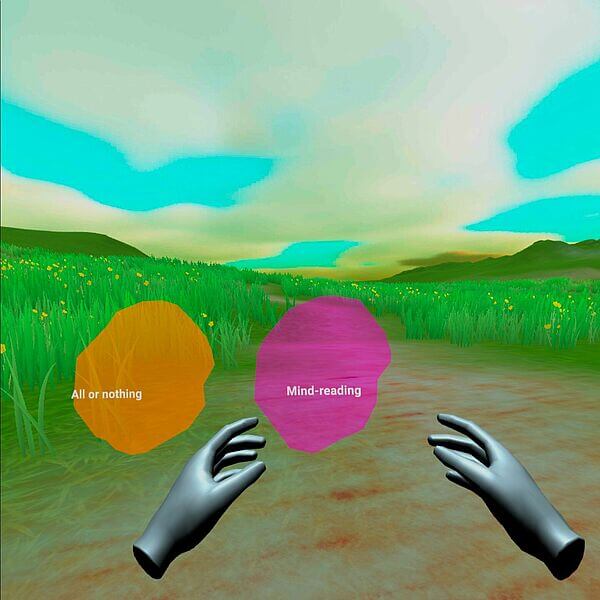 He is not the only one. Ameliate was awarded a Startup grant of the Employment and Economic Development Offices (TE Offices) of the Ministry of Economic Affairs and Employment in Finland. The start-up grant should ensure the income of a new entrepreneur during the estimated time required to get the business up and running, up to a maximum of 18 months. “It is about 700 euros per month. That covers the basic expenses so far and anything you earn with the business is extra.”

In May 2021, he also got into partnership with the innovation and startup centre dedicated to VR and AR Helsinki XR Centre and the Finnish Virtual Reality Association (FIVR), an association for VR developers in Finland with the aim is to advance AR and VR development in Finland. “They offer us a network to collaborate with other professionals as well as mentoring and opportunities to pitch for investors.”

One of the things Pohjanmeino is most proud of is that he grew a team of four members. All team members finished the same EIT Digital Master School Programme in September 2020. Pohjanmeino is the co-founder and CEO, Wilson is co-founder and product designer, Michele Romani, the BCI and VR developer, joined in December 2020, and Kate Belakova joined the team in 2021 as Chief Business Developer. “I see the team as the biggest success of Ameliate so far. It is very encouraging to see others getting excited about my business idea.” 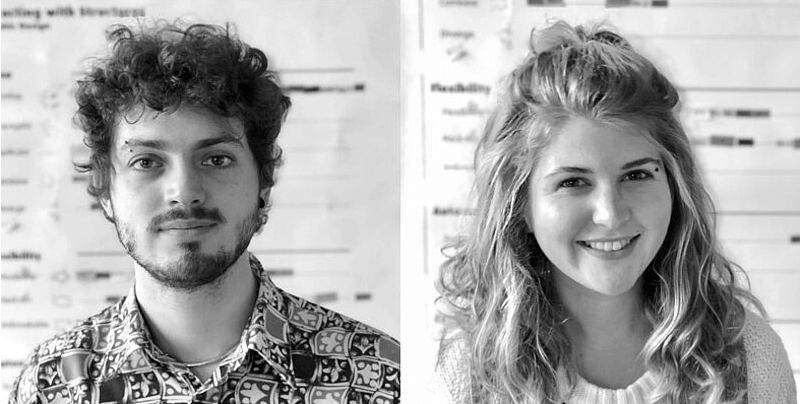 The full commercial version of CBT VR with VR is planned to be launched at the end of 2021. “We need to have among others CE certifications. We will also implement a Brain-Computer Interface (BCI)-solution that Michele has been researching. This is essentially using ECG badges on ones foreheads to detect emotions.”

Then the road is clear to market the novel psychology product. Pohjanheimo already noticed a lot of interest. “We’ve been in touch with several companies and healthcare organisations in Finland which are hubs for psychotherapists and psychologists. And we are working with some psychologists and therapists already who are trying the tool and helping.  We have our eyes already open in the entire European Union. In 2024 we aim to expand to the US.”

So far, Pohjanheimo and his team have not found direct competitors for CBT in VR. “We did identify some competitors having psychological tools and apps aimed at pain management, exposure therapy or mindfulness therapy. The CBT tools there are, are mobile self-help applications only. We have identified a few competitors who have the feature to connect the app to a therapist, but this competition is not that strong. While CBT in VR has been researched in institutions, Ameliate is the first in the market to come with Cognitive Behavioural Therapy targeting cognitive biases in Virtual Reality.

This leaves all the space for Ameliate to shake up the world of psychology.

“I think that would have a significant impact that in the future, it could replace the ordinary methods used in CBT therapy.” “When therapists and patients start using our VR CBT, they might see the benefits over to the pen-and-paper CBT and then it could act as a replacement for traditional therapy tools, yeah.” But till the future is there, Pohjanmeino aims to have healthcare institutions to prescribe Ameliate’s VR CBT to patients to reduce waiting lists in mental health care.