Meet me at the bar! How uni students interact on a campus, and why chocolate can help

But our research, published online in Computers in Human Behavior, found that students don’t always mix outside their area of study or cultural cliques.

That could change, however, if universities supported social networks that are shown to encourage a greater diversity and interaction among students. 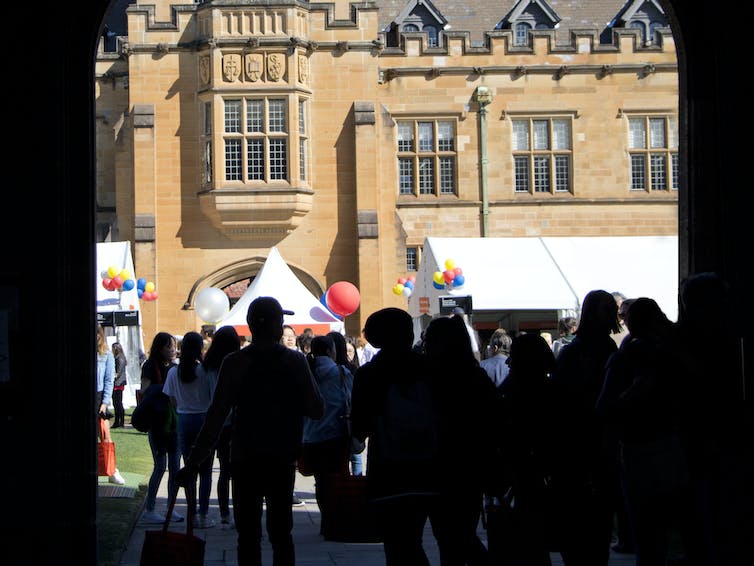 Students like to join a number of societies, but does that encourage them to mix between different cultures? Source: Shutterstock/Ann Hodgson

Many universities are proud of their active clubs and societies that organise numerous social events aimed at bringing students together. The societies also typically record who participates in their activities.

While it is increasingly common to analyse data from social media of online interactions on campus, the use of data from face-to-face social activities of students is underused.

So our study analysed tens of thousands of anonymised records gathered by societies at the University of Sydney to learn how and where students socialise.

We use heat maps to visualise the data. The diagram below reveals which places are popular on and off the campus for students to socialise. 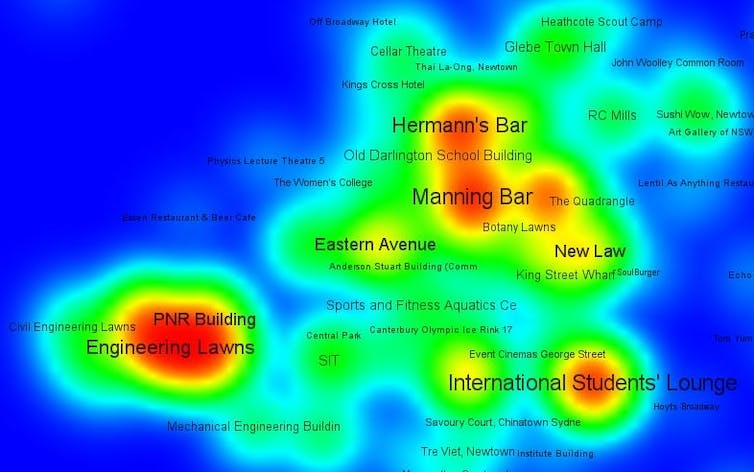 Social network map based on locations of students’ events. The colours correspond to the density of social interactions in each area. The red locations are most popular among students, followed by yellow, and green. Blue areas are on the periphery of students’ social lives. Faezeh Karimi and Petr Matous, Author provided

Although this map is based on the location of events, it is not a geographical map. The distance between two places is proportional to the number of students who like to socialise in both locations.

For example, the two bars (Herman’s and Manning) in the red-hot centre of social activity of this university are actually on the opposite sides of the campus but close to one another in this diagram because they attract the same kind of students.

There are many students who like to spend their time together in bars on and around the campus, as is evident in the two (red coloured) bars on the map.

The two main bars alone account for 10% of students’ social activity recorded in the data. Aggregated over the course of one year, students visit the two bars for their society events almost 3,500 times.

We can see a separate cohort of students who socialise in and around the facilities of the engineering faculty.

The Peter Nicol Russell Building (PNR), in the heart of the engineering precinct, is designed as a large-scale teaching space but it also a home for most popular social events such as “Free Pizzas”.

Students socialising around the building and on the lawns outside tend to be affiliated with engineering societies. Their activities typically focus on barbecues and drinking events, and are less often attended by non-engineers.

Similarly, students affiliated with engineering societies are less likely to participate in non-engineering events (even if they are held in a pub on their side of the campus).

Social scientists have previously tried to explain the apparently distinct culture of engineering, with some blaming a special mindset of students attracted to technical disciplines.

The third large group of students socialise together mainly in facilities dedicated to international students. They tend to be affiliated with societies that cater mainly for students from different Asian countries.

Many events organised in this cluster focus on the cuisine of a student’s country of origin. This is the only major group whose events tend to be non-alcoholic.

So while alcohol brings many students together, it seems to push away some others who organise their own events without drinking.

Deeper analysis confirms that there is a gap between the networks of international and domestic students.

The numbers of international students in Australia has been increasing in recent years. Students from diverse backgrounds can ideally contribute to the educational experience of anyone preparing for a global career or to live in a multicultural society.

For example, the Vietnamese students’ society, Chopsticks Australia-Chinese Cultural Appreciation Society, and WASABI Japanese Cultural Society are among the largest and most active on campus. There is a lot of interaction between these societies in the international students’ cluster.

The disconnect between international students and domestic students is evident in the map above, with the International Students’ Lounge being a popular social activity centre but relatively isolated from other locations.

There is another way of looking at the data. Instead of locations, the diagram (below) shows the names of student societies on campus. 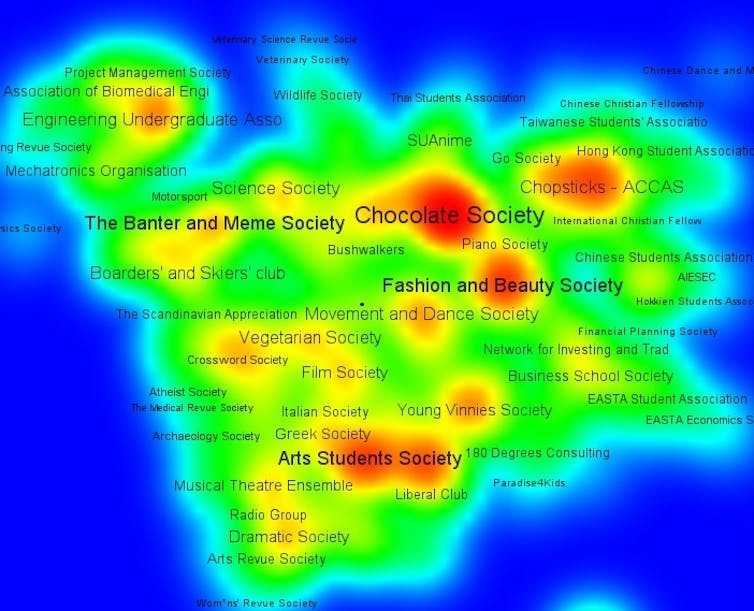 While the first diagram was based on the joint participation of students in events, the second diagram is based solely on their joint membership of societies.

Societies that attract similar people (that is, societies that have a high membership overlap) are close to each other in this map. Red spots highlight locations with high overlap between different societies.

The societies that stand out in the core of the diagram attract members from diverse groups. For example, the Chocolate Society seems to connect students from different ethnic backgrounds, disciplines, hobbies and political interests.

Engineering still makes a popular show but is not the dominant discipline as before. Arts seem to be taking a lead in attracting diverse members.

Being in the same club does not always lead to socialising together at various club events (as the first diagram showed) but it is potentially a first step towards meeting people from different backgrounds.

Although this data comes from only one university, it echos some common concerns about the social integration of international students and some stereotypes about the distinct social lives of engineers.

University societies can be a welcoming environment for a diverse range of students to engage in meaningful interactions with one another. But universities cannot tell students whom they should socialise with in their free time.

What they could do though is to support those societies and events that encourage students to mingle outside of their study discipline and cultural identity. This type of data and analysis can give universities some idea where to start.

What are ‘International Student Services’?

How to maintain your life-study balance at university

Where were the cast of ‘Bridgerton’ educated?