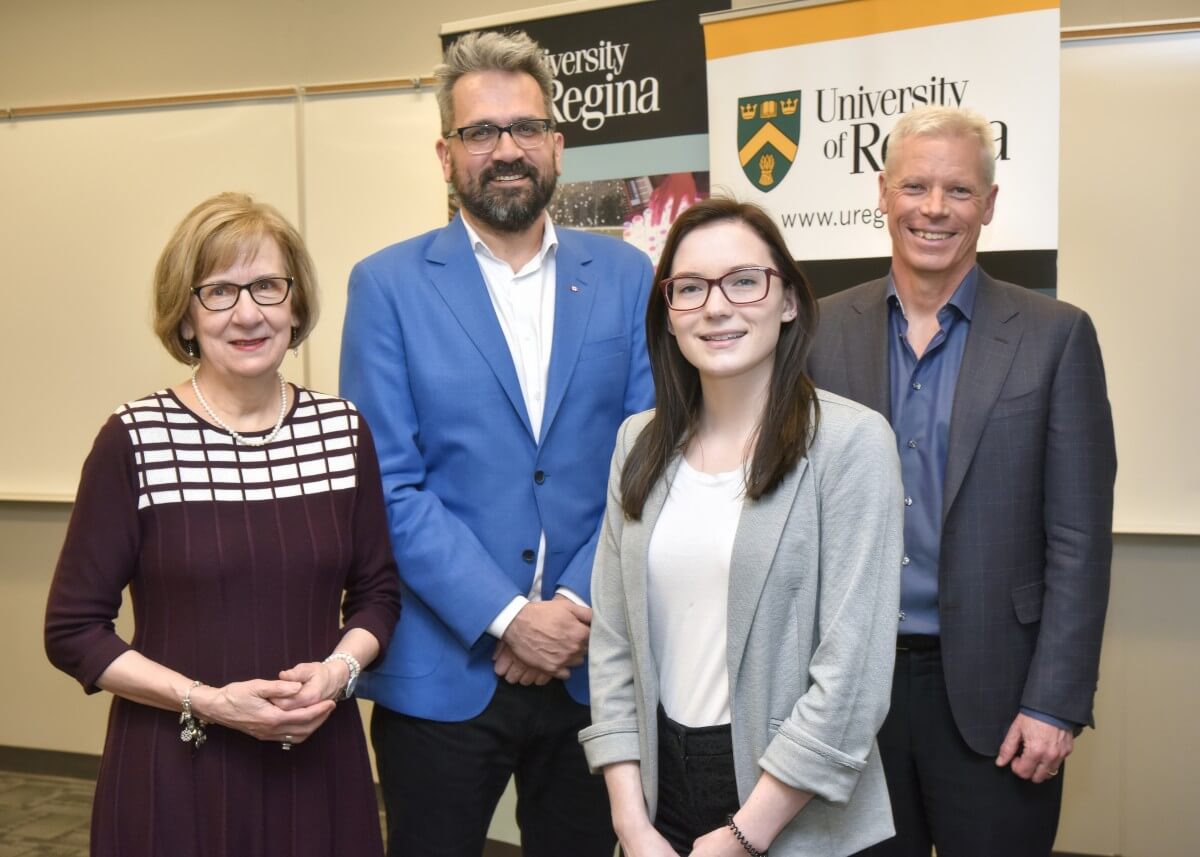 Promoted by University of Regina

Alexandria Ripplinger is a fourth-year biology student at the University of Regina currently working on her thesis. Focusing on multiple sclerosis research, she was awarded the university’s first Jack and June Krogan Women in Science Scholarship last year.

Founded by Dr Nevan Krogan – the world-renowned researcher, molecular biologist and professor best known for his work on HIV and cancer – the scholarship is in honour of his parents.

They encouraged him and his three sisters to go after their dreams – in the same vein, the scholarship is to spur female students to pursue their dreams and support their work in STEM fields.

“From my experience, women are some of the best scientists I have encountered. Anything we can do to encourage more gender balance is great for STEM,” Dr. Krogan explained.

According to Alexandria, the award, with its CA$3,000 grant and fully-paid two-month summer research experience at the Krogan Lab in San Francisco, will help her career tremendously.

“This opportunity will allow me to see new techniques and to collaborate with other researchers. The increased exposure will help me to find what areas of research are my biggest passions and what I can pursue,” she emphatically stressed.

“I hope that this award will inspire other women to follow their dreams and pursue their careers in science. This award has underscored for me to not get discouraged, keep trying, and seek out all opportunities that you can!”

Her story is a great example of how universities and alumni can work together to help encourage female students in STEM fields. Many women have highlighted a lack of support in STEM, and scholarships that support their research are vital to keeping students motivated, funded, and gaining the necessary exposure they need to continue their investigations.

At the University of Regina’s Faculty of Science, set in the heart of Canada, women in STEM have plenty of support – both academically or financially –  and can learn from professors who inspire them to become the changemakers the world needs.

This is evident in their high female student intake and stories of how female graduates go on to become trailblazers in STEM.

Women supporting and inspiring other women in STEM

Last year, the university announced that CA$200,000 in scholarships will be allocated specifically to female graduate students entering the Faculties of Science and Engineering. It is just one of several initiatives at the university that are designed to support women in STEM.

Research has shown that having female faculty serve as good role models for women in STEM and leads to strong female student performance.

Interim Vice-President (Research) Dr Kathleen McNutt said: “Female researchers in STEM are not only doing some amazing research but they also serve as key role models to students, in particular, young women seeking careers in the STEM fields.”

“Supporting and advancing the education and careers of these young women will be critical to disrupting old paradigms and advancing an innovation agenda that is both gender-responsive and brings diversity to the forefront of innovation.”

“We must do all we can to increase the number of women in STEM. By creating more opportunities in STEM, we can improve gender equality and bring fresh perspectives and ideas to the field,” she concluded.

With so much support and encouragement by the department, it’s no surprise that female graduates from the university go on to do great things and become women leaders in STEM fields.

Paving paths to exciting careers for women in STEM

Another example of how the university is creating a supportive atmosphere for women in STEM is the inspiring story of graduate student Alejandra Castilla Bolanos.

3MT is a university-wide competition for graduate students that sees participants present their research and its wider impact in three minutes or less to a panel of non-specialist judges.

Founded in 2008 by Professor Alan Lawson at the University of Queensland, Australia, it was devised to not only celebrate innovative graduate student research, but also to encourage students to use their soft skills like communication and public speaking.

Alejandra knocked her presentation out of the park, and also received the 3MT People’s Choice Award for “Forget What You Know about Alzheimer’s Disease,” a three-minute presentation on the complexities of her research into the debilitating disease.

Her ground-breaking research work in Alzheimer’s has also been featured in the news, for changing the way neuroscientists approach the disease.

Alzheimer’s disease happens when A-beta proteins attach to brain cells and kill them, which means that neurons are no longer able to communicate certain memories and functions.

Up until recently, the neuroscience community believed that all types of A-beta proteins were harmful to cells. However, her research has proven this wrong.

Alejandra told Global News: “We [found] that some kinds of A-beta can actually neutralise the effects of other kinds of A-beta and recover the electrical connectivity that the neurons have to communicate with each other.”

Planning to continue her research at the University after her graduate studies programme is over, Alejandra hopes to develop a cure or treatment for Alzheimer’s one day.

Alejandra isn’t the only inspiring figure at the Faculty of Science. Academic programmes here are delivered by experienced faculty members who are women leaders in STEM fields.

In addition to teaching, they serve as inspiring mentors students can turn to for help to get their career started.

In 2020, the country is operating over 80 economic class immigration pathways – the most in its history – including dedicated streams for international students such as the Post-Graduation Work Permit Programme.

University of Regina is supporting women in STEM through their engaging academic programmes and female-led research.

From Europe to Canada: Your next study abroad adventure